Unite ambulance members on strike to save beleaguered service

Just before Christmas around 1,000 Unite Welsh Ambulance Service workers announced they would be staging industrial action.

The members, including paramedics, EMTs and emergency call handling staff, voted by 88 per cent to strike. Unite will be announcing the strike dates for Wales shortly.

They will join over 1,600 ambulance workers and Unite members in England, who took strike action on December 21.

Unite’s Welsh Ambulance Service members say such is the decay across the entire health service, that where they once saw 10 patients a day, often they can now deal with only one per shift, spending hours and even whole days at a time sitting outside A&E with patients waiting to be seen.

“Unite’s ambulance service members in Wales are striking because they see first-hand every day how the NHS is collapsing,” commented Unite general secretary Sharon Graham said.

“They are dedicated life-saving professionals and are taking this step because they know the NHS itself needs saving.

“The Welsh government must put a better offer on the table to help resolve the recruitment and retention crisis that is crippling the service. But it is also incumbent on the Conservative government in Westminster, who hold the ultimate responsibility for the years of destruction inflicted on the NHS, to meet with heath unions and urgently address staffing and pay levels,” she added.

Over a decade of pay cuts and crippling service pressures have decimated NHS recruitment and retention – a primary cause of the crisis engulfing the service. Nearly one in 10 posts – 132,000 positions – are now vacant and the figure is continuing to grow. October was the worst on record for meeting NHS targets.

Unite members in the Welsh Ambulance Service confirm that many Red and Amber calls, the most serious and life threatening of categories, are not being responded to quickly enough and sometimes not at all.

“But they know they have to take a stand to prevent the NHS from total collapse. As with all NHS strikes, life and limb cover will be provided and ambulance workers will stand ready on the picket line to respond to calls if they are needed.” 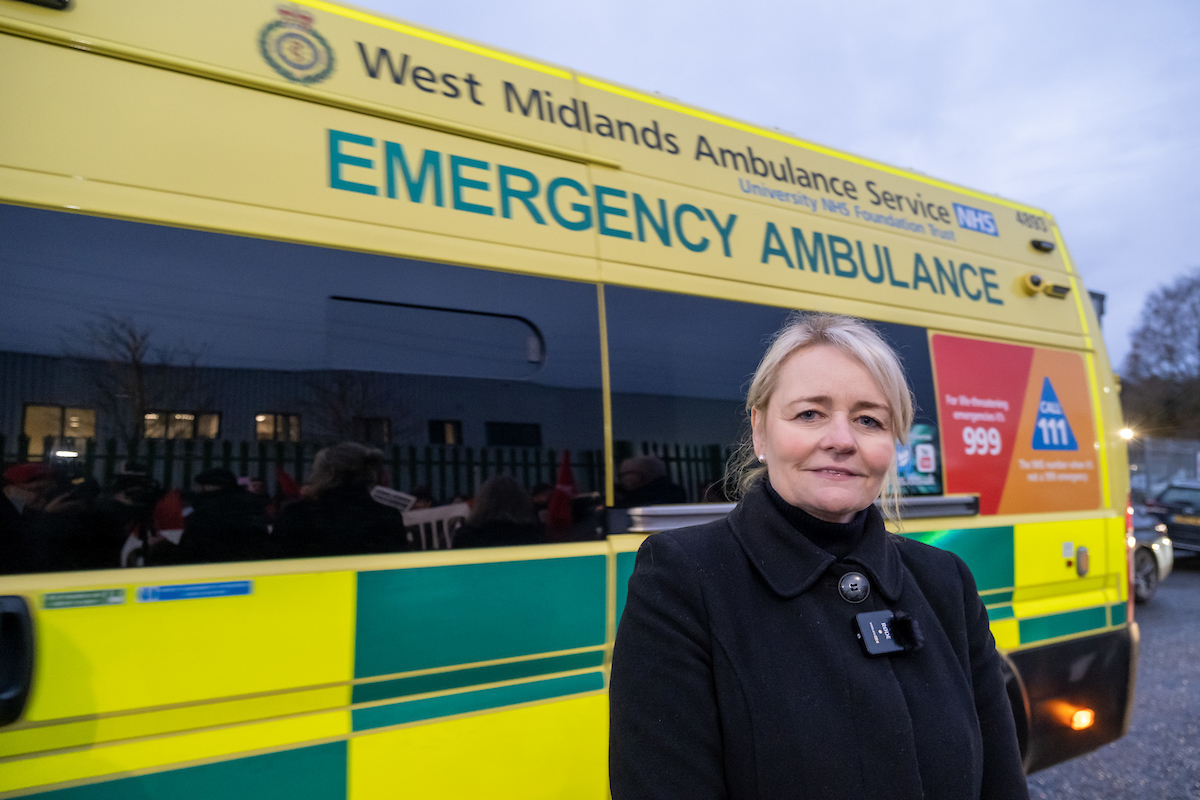 And just a day before our brave Welsh members announced they would be taking strike action, on December 21, Unite general secretary Sharon Graham joined our resolute Coventry ambulance workers on their picket line. Over 1,600 workers at the West Midlands, North West and North East ambulance service trusts took action that day.

Addressing our Coventry ambulance members, Sharon told the crowd,“This government is guilty of criminal negligence in its hollowing out of the NHS long before now. The strikers are actually trying to save the service.” Figures uncovered by a recent freedom of information request from BBC Newsnight showed the number of people in the West Midlands who died after an ambulance delay has risen significantly. Yearly numbers rose from one in 2020 to 37 up until September 2022.

“The government has had months to intervene and end this dispute” commented Sharon. “They chose not to. It’s Steven Barclay who is holding the country to ransom, not the unions. He will have to carry the can if patients suffer.

“The shocking statistics from West Midlands Ambulance Trust tell the real story. Where were the government’s ‘well-rehearsed contingency plans’ when people were dying in the West Midlands because the crisis in the ambulance service meant an ambulance couldn’t get to them on time? It has to stop,” she added.